Scenes from U Bein Bridge in Myanmar

Despite U.S. and European sanctions against direct importation of Burmese teak, the industry is thriving. Teak, and particularly Burmese teak, is prized for its durability and size. The wood bends, but resists breaking, making it ideal for construction. It resists water and insects, and certain varieties exhibit a glorious a red hue. Teak, along with precious gems, are major sources of revenue for the Myanmar government. One can find teak everywhere in Myanmar, from monasteries to bridges.  We passed teak forests on the way from Yangon to Kyaiktiyo. Along the Irrawaddy River in Mandalay we saw caravans of cargo ships piled with teak logs. The ancient Kingdom of Ava (yes, a striking coincident to our daughter’s name and even pronounced the same way) built its palace compound out of solid teak. When the capital was moved to Mandalay, unwanted teak made its way to other purposes. One of the resting places became the U Bein bridge, located in Amarapura, about half hour south of Mandalay. 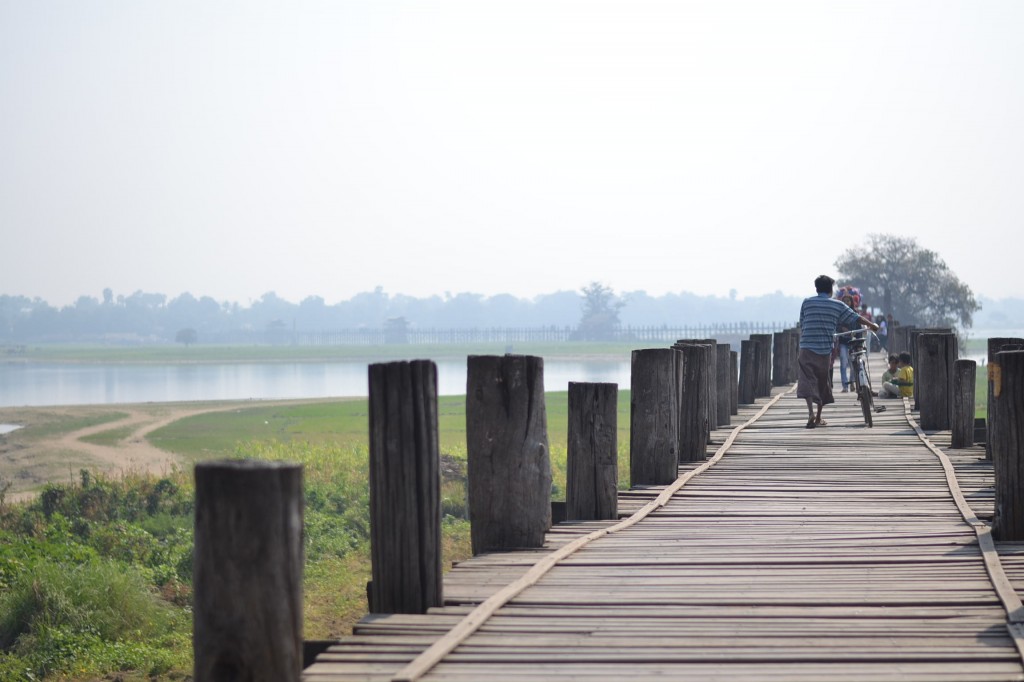 The bridge is 1.2 km and, as one walks from Amarapura to the other side, the scene from the bridge gets increasingly bucolic. Each teak log is magnificent on its own, and taken together the span looks like a page book from a bygone era. Local life seems to resume as it has for decades, with fisherman casting nets in the water and people farming the fields on the banks. What I found just as fascinating was watching the morning progress beneath the boards. Women worked fields. While some men took a break near their bullock cart. Incidentally, a trend I have noticed in Southeast Asia is that women work hard and men generally assigned to calmer tasks, such as fishing. This may be a global phenomenon, but it does seem more overt in this part of the world. If you find yourself in Mandalay, cross the length of U Bein Bridge, then relax (particularly if you are a man) over a cups of tea in one of the tea stalls under the bridge and watch yesteryear yourself.